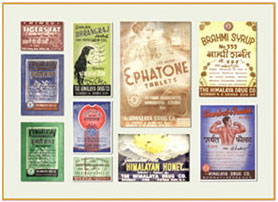 The first batch of Himalaya products

Himalaya's story began 90 years ago when Mr. M Manal, the founder, saw a villager in Burma pacify a restless elephant by feeding it the root of the plant, Rauwolfia serpentina. Fascinated by the plant's effect on elephants he had it scientifically tested. After researching the herb, Serpina®, the world's first natural anti-hypertensive drug was launched in 1934.

There has been no looking back. In 1955, Himalaya introduced Liv.52, a liver formulation that ensures optimum liver function. The product soon became one of the world's top selling herbal medicines. This success set Himalaya on a growth path, which has continued to date.

Tracing its beginnings to a curious mind of a visionary with only a hand-cranked tableting machine as capital, Himalaya now has the capacity to churn out over 10 million tablets a day with 30 units sold every second.

Gradually building its equity in scientifically researched natural products, Himalaya expanded its portfolio from pharmaceuticals to personal care, well-being and animal health, evolving into a 'head-to-heel' herbal healthcare company. Pioneering research by Himalaya's Research center has converted Ayurveda's herbal tradition into a complete range of proprietary formulations dedicated to healthy living and longevity. This legacy of researching nature forms the foundation of the company.

Today, worldwide, the Himalaya brand is synonymous with safe and efficacious herbal healthcare. 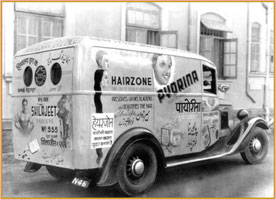 The Himalaya van circa 1940. Yes, branding was important back then too!

x
There are items
in your cart
Total:
Continue Shopping View Cart PROCEED TO CHECKOUT

You have successfully subscribed!

Please login and you will add product to your wishlist